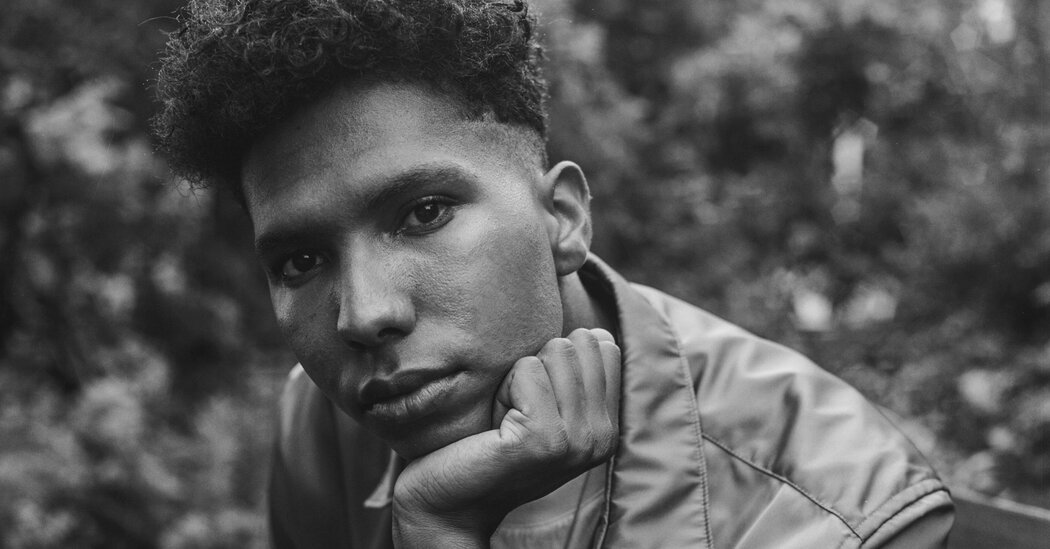 Tyler Mitchell: ‘Black Beauty Is an Act of Justice’

A Black youth lays bare-chested in a field of wildflowers. Three others play double Dutch, framed from below, the blues of their jeans and tees fuzzing into the sky overhead. A woman sits on a placid beach, the sand-caked skin between her scoop-back swimsuit beating in the sun.

This world that Tyler Mitchell conjures in his debut photography monograph, “I Can Make You Feel Good,” is a handsome fantasy of permanent sunshine and lithe bodies, suffused in intense, saturated color. It surveys a body of work made from 2016 to 2019, some of which were exhibited earlier this year in Mr. Mitchell’s first U.S. solo show of the same name at the International Center of Photography in New York and earlier at the Fotografiemuseum Amsterdam. It is a world populated exclusively by Black youth in a state of perpetual summertime. Mr. Mitchell’s subjects swim, or fly kites, or engage, for reasons that are unimportant, in synchronized hula-hooping. They are all beautiful and beautifully lit and unbothered. Mr. Mitchell has photographed campaigns for fashion brands like Marc Jacobs and JW Anderson, and so some of his subjects inhabit the world of luxury commerce. That doesn’t bother them either.

Certainly Black Americans have laid out in the park and let the sunshine wash over them before. Mr. Mitchell’s proposition is not that these mundane pursuits are particularly radical in themselves, but that picturing them is radical precisely because the experience of Blackness in the United States has for so long — forever, really — been keyed to the implicit threat of violence, which has made the prevailing image of Black people in the popular imagination one of struggle. In art historical terms, leisure time was rendered as the purview of the white gentry. The images in “I Can Make You Feel Good” meet the demands of the moment, each one its own “Le Déjeuner Sur l’herbe,” its levels optimized for our Instagram-primed consciousness.

“My focus to some degree is autobiographical, thinking about certain desires and freedoms I wished for myself growing up in Georgia, in nature and the landscape of the South in general, places that can be, on the outside, inviting, but have a complex history where folk that look like me feel rejected,” Mr. Mitchell said. His practice functions as a kind of corrective. Nearly every image in “I Can Make You Feel Good” is set outdoors, a gambit of visibility and a declaration of fearlessness.

Mr. Mitchell, who is 25 and rangy, grew up in Marietta, a largely white, conservative, middle class suburb of Atlanta. (His high school classmates voted for John McCain in a 2008 mock election.) He became interested in images as a teenager, around the time he began skateboarding, a pursuit that is as predicated on community as it is obsessive about self-documentation.

“It was pretty radical because that was just not a normal thing at all for kids like me in my area of Georgia,” he said. He pored over the roughly-shot skate videos made by hobbyists and uploaded online, as well as more filmic versions by directors like Spike Jonze, eventually cultivating a following for his own interpretations that he posted to Tumblr.

That interest carried him to New York University, where he studied film and television with designs on cinematography, before an instructor identified fashion photography’s verve in Mr. Mitchell’s casual point-and-shoot images of friends.

“I was a bit taken aback by that,” Mr. Mitchell said. “I didn’t know necessarily the first thing about what it means to shoot for Gucci or Prada. I styled people out of my closet. I was like, ‘this is a nice colored sweatshirt, wear this.’”

As he became more interested in ideas about identity, both his own and as a function of Blackness, he thought the fashion image could be slyly harnessed, “an interesting way to speak about my community, through dress,” he said.

Mr. Mitchell began picking up commissions while still in school, eschewing traditional channels such as hiring an agent or landing an apprenticeship with an established photographer. Instead, he did what most people of his generation are preternaturally adept at, which is parlaying connections made through social media. His early jobs were of rising music world figures shot for independent magazines: Kevin Abstract of Brockhampton for The Fader in 2016, and the rapper Lil Uzi Vert for that magazine’s cover the following year. He became known for making tender portraits that teased out their subject’s inner lives, placing him among a cohort of emerging photographers like Nadine Ijewere, Dana Scruggs, and Campbell Addy who focus on nuanced expressions of Black life.

In 2018, a year out of N.Y.U., Mr. Mitchell photographed Beyoncé Knowles for the cover of Vogue, one of the youngest, and the first-ever Black photographer to do so, which says more about Vogue than it does about Mr. Mitchell. The near-blinding wattage of the assignment and its historical context, combined with the planetary gravitational pull of Beyoncé’s celebrity, hurled Mr. Mitchell into the symbiotic consciousness of the art and fashion worlds.

Mr. Mitchell cites Ryan McGinley and Larry Clark as early influences, and there are elements in his work of those photographers’ preoccupation with nihilistic youth, unmoored and often in varying states of undress. But the pictures in “I Can Make You Feel Good” are more informed by what those artists’ images lack, namely, Black people.

Mr. Mitchell’s sitters, in their multiplicity of leisure and sumptuous knits, suggest a kind of photographic negative of Dana Lixenberg’s monumental “Imperial Courts” series, humanistic black-and-white portraits of the residents of a Watts housing project rived by cycles of poverty and violence, made from 1993 to 2015 in the shadow of the Rodney King riots. Mr. Mitchell’s world — self-assured, calm — suggests an alternate timeline for Black American life, one not waylaid by the constant grinding of racism and recrimination.

Fashion photography, a discipline defined by artifice, is perhaps not the most immediate venue for politics. But inasmuch as Mr. Mitchell’s images conjure fantasy, they’re an update of fashion imagery’s prevailing one, based on an idiom of thin white bodies. His use of a fashion vernacular becomes a kind of Trojan horse. As he puts it, “Black beauty is an act of justice.” In 2017, he was approached to shoot a campaign for Marc Jacobs. Recalling the debacle of Mr. Jacobs’s use of rainbow dreadlocks wigs on white models the previous season, Mr. Mitchell reoriented the commission as cultural reclamation, casting Black nonprofessional models to wear Mr. Jacobs’s collection of tracksuits, high-rise bucket hats, and oversized gold jewelry, signifiers gleaned from ’80s-era hip-hop.

“Honestly it’s less about the look than what the look means when a protagonist that looks like this takes it on,” Mr. Mitchell said. “It becomes about how we present ourselves culturally. The clothes kind of become this other thing.”

In the Vogue shoot, Mr. Mitchell photographed Beyoncé as regent, perched on a throne in rococo crowns of spilling flowers, tropes of Renaissance portraiture and white European aristocracy. It’s a now-familiar subversion seen in Kehinde Wiley’s paintings, and, to a varying degree, the 1980s street portraiture of Jamel Shabazz, who assembled Black and brown youth into elaborate tableaux as a counterbalance to degrading and superficial media portrayals. (Mr. Shabazz was, in turn, inspired by James Van Der Zee, who captured the private dignity of the Harlem Renaissance Black community.) The images in “I Can Make You Feel Good” speak in a fashion vernacular, but their thrust is the same.

Still, Mr. Mitchell refers to his practice as a “Black utopic vision,” a concession to their own paradoxical quality. “I don’t think there will be a place or a time when things are perfect, but I do have to make these images and have this conversation and hope,” he said. “That’s what my life’s work is about: presenting these images in which the young Black men and women around me look dignified, are presented as a community, and also ask the tough questions in terms of: what are the things we’ve been historically denied?”

As a book, “I Can Make You Feel Good,” can be inscrutable. Printed in full bleed and without identifying titles, it eludes easy delineation between Mr. Mitchell’s commercial and fine art photography. The lack of white space is both an aesthetic choice — plunging the viewer inside Mitchell’s totalizing field of vision — and also a psychic state. The project’s universe is one where Black life is centered and no outside perspective encroaches, though that’s different from being hermetically sealed. The perniciousness of racism seeps in subtle ways.

The book’s cover image is taken from Mr. Mitchell’s series “Boys of Walthamstow”: young Black men stand bare-chested in a field, their heads bowed. There’s an element of fraternity, but one of the youths’ heavy chain necklace places the image within the continuum of Black American subjugation, from slavery to sharecropping to the prison labor of the chain gang. The images of young people lazing on picnic blankets and eating dripping ice cream cones are haunted by inherited traumas: a young man in a hoodie, face down on the floor with his hands locked behind his back, and another aiming a plastic squirt gun, echo the killings of Trayvon Martin and Tamir Rice, splintering Mr. Mitchell’s Eden.

The title, “I Can Make You Feel Good,” sounds like a cure or a come-on, but really its meaning is less obtuse. “I literally heard it in the Atlanta airport, man,” Mr. Mitchell said of the 1982 Shalamar song. “I was with my mom traveling to Amsterdam, thinking about the FOAM [Fotografiemuseum Amsterdam] show, not sure if I was going to take it, like, ‘nah, I’m not a fine art photographer, why would a museum be offering me a show?’ And I’m sitting there and I’m like, damn, this song is good. And the words kept ringing in my head and I was like: that’s the name of the show. That’s the declaration.”

The museum was interested in a more veiled or academic title, worried that the vaguely sexual entreaty of an ’80s R&B group was too direct. “I was like, no, ” Mr. Mitchell said. “That’s exactly what this time should be about: being as direct as possible.”