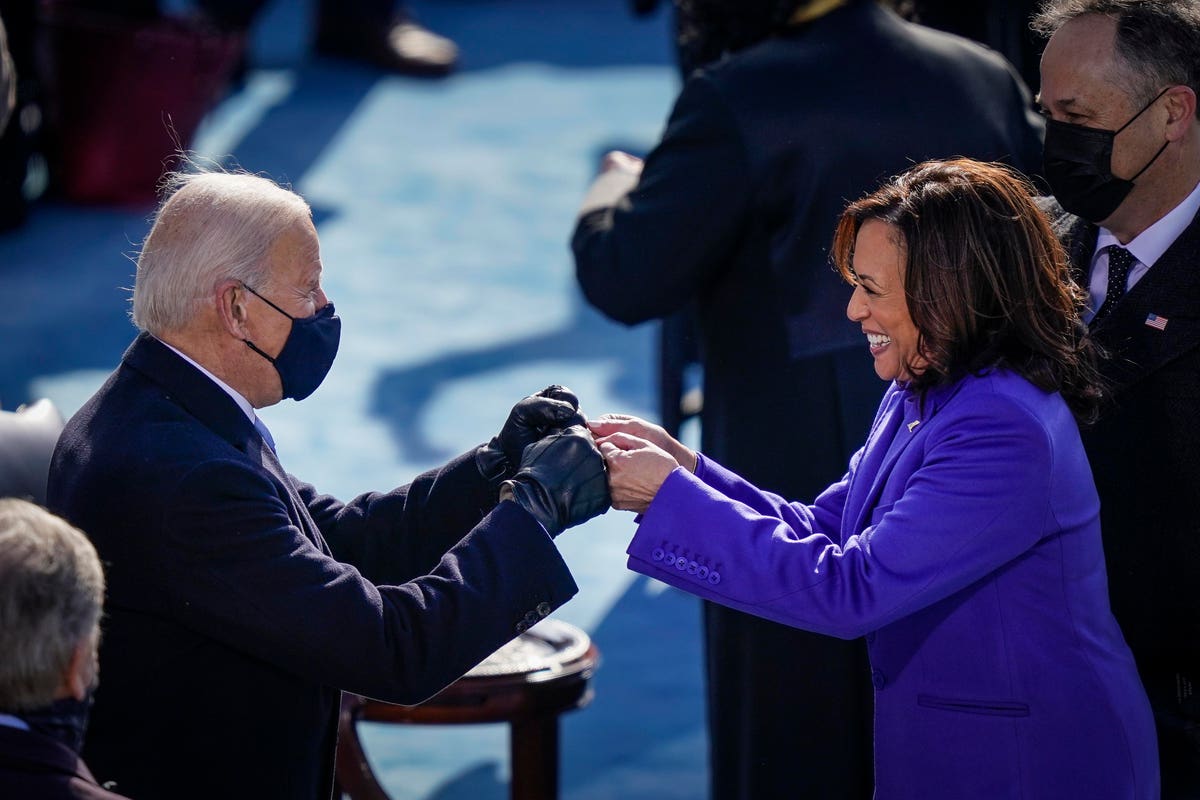 While there will be no inauguration ball to usher in Joseph R. Biden, the 46th President of the United States, and the 49th Vice President Kamala Harris, there has still been a lot of style and unity conveyed from the night’s event.

Harris wore an all-black ensemble, in a black overcoat with lapels the shined from the television lighting, styled by Sergio Hudson. Biden wore a striped tie and popped the collar on his Ralph Lauren coat to withstand the winter elements in the Washington D.C. area.

The United States has changed its political attire. January 20, 2021, marks the day President Biden and Madame Vice President Kamala Harris were both sworn into power during the inauguration at the very Capitol building where democracy was distastefully attacked by insurrectionists white-supremacist.

In an act of resilience, the proceedings at the Capital were in effect, and the 46th President Of The United States came impeccably dressed for the occasion and job at hand.

In a remarkably tailored silhouette, we were stunned by how noticeable the stature of anyone in a suit can be. Things are different from the previous administration and the Commander-In-Chief at the time, we can avoid dealing with elongated ties, tanning spray, and boxy suits. The Biden administration is boasting elegance in the seams of their operation.

And there is indeed a sense of harmony and unity carried throughout this new administration. One that provides a stage for the likes of Jennifer Lopez, and Lady Gaga, two true New-Yorkers, who have expressed themselves throughout the years as inclusive members of society, and have set trends for fashion along the way.

President Biden wore the great American fashion designer Ralph Lauren to address the American people. He and The Second Gentlemen, Doug Emhoff, in a double-breasted number, displayed refinement in their coats and suiting. Shoulders were trimmed and tailored fittingly.

The first-ever women Vice President, Kamala Harris, has only worn black designers since her moving into the White House and the District Of Columbia. Harris wore a Pyer Moss camel coat, the brand known for its statement-making fashion on racial injustices, to attend a memorial for the 400,000 and counting COVID-19 victims at the Lincoln Memorial the night before the inauguration.

Vice President Harris decided to wear purple in honor of the Women’s Suffrage Movement to the inauguration. It was also to pay homage to the first Black woman to run for President, Shirley Chisholm, whose campaign colors were purple and yellow during her 1972 run for office. Like the Vice President, the former First Lady similarly wore a plum color to represent those same sentiments.

First Lady Jill Biden dressed in the design of budding American fashion designer Alexandra O’Neill for Markarian. Vice President Harris’ stepdaughter, Ella Emhoff, wore a Miu Miu embellished long coat with a cinch-waist with a massive white collar that spread similarly decorated. All of the sartorial queues set the tone for the next four years. Far removed from the disconnect that former fashion figures of the previous administration.

It’s worth remembering when former First Lady Melania Trump wore a jacket that said “I Really Don’t Care, Do U?” on her way to visit detained children at the Texas border. Or when Ivanka Trump was shamelessly pushing her products while she actively worked in the 45th President’s administration.

We can see dignity in the lining of this new regime, one that is fit for the job and tailor-made for this level of political labor. The intelligence in each one’s fashion sense and demeanor proves a great deal of coherence among this office.

Although we are still in a pandemic state, we can only hope that this year will be the year we put on pants again and no longer feel like we are working from home. Working with dignity and dressed for the job.