Original Beauty Technology v G4K Fashion: “Passing off is not a tort of unfair competition”

Although the claim initially involved the alleged infringement of 91 designs, only 20 of those designs were considered at trial (whilst proceedings concerning the remaining 71 designs were stayed). For the purposes of this article, we shall focus more on Original Beauty Technology’s passing off claim, as this raises some interesting legal issues.

HOUSE OF CB was initially set up in 2009 as an eBay storefront under the name CELEB BOUTIQUE, which was eventually rebranded to HOUSE OF CB in 2013. In 2014, Original Beauty Technology launched sister brand MISTRESS ROCKS. Similarly, OH POLLY also initially launched as an eBay storefront under the name POLLY COUTURE, before rebranding to OH POLLY in 2015. As there were no major disputes between the parties as to the applicable law, this case turned entirely on its facts.

It was the emulation of all of these elements that Original Beauty Technology said amounted to passing off.

The judge also accepted that the garments were an important aspect of the distinctiveness of the respective brands and that the garments sold by each party were similar. It was also clear that G4K sought to emulate HOUSE OF CB’s style as the judge was directed to various examples of images from OH POLLY, which were said to be both similar to and later in time than HOUSE OF CB images and some of which were shot in the same locations (see image below). 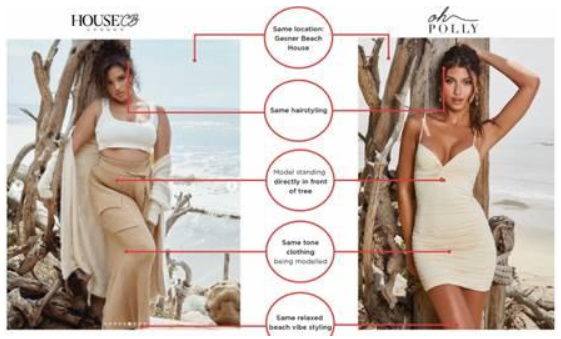 G4K Fashion did not stop there. They also used the same models as those used by HOUSE OF CB and its sister brand MISTRESS ROCKS, all of which had been noticed by consumers, as exemplified by the following social media comment: “oh Polly wanna be house of cb so bad lol down to the same damn models”. 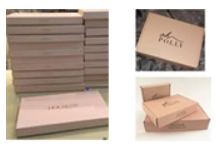 Original Beauty Technology also relied on multiple similarities between the HOUSE OF CB website and the OH POLLY website (desktop and mobile versions). The judge agreed that there were many “obvious similarities” between the respective parties’ websites, including banners, footers, the layout of the images of the garments, and use of mottled pink as the background for studio photographs. Two similarities struck the judge as particularly noteworthy, namely, the arrangement of garments by colour (not a usual way of arranging garments on an e-retail site) and the fact that HOUSE OF CB’s website directed garment returns to a returns “depot”, an American expression also adopted on OH POLLY’s website (which the judge considered odd for a Scottish website).

Original Beauty Technology also pointed to the fact that the OH POLLY flatlays (presenting images of garments laid flat) were very close to the HOUSE OF CB flatlays and unlike those of other competitors.

Given all the evidence provided, the judge concluded that G4K had clearly taken steps to emulate HOUSE OF CB and that it had “been able to ride on the coat-tails of the claimants’ successful business model, and rather than investing in their own development, or spent money and time trialling different models, styles, locations, packaging etc, they have obtained an advantage by copying a successful competitor”.

Despite this, the passing off claim failed as the judge accepted that passing off is not a tort of unfair competition and therefore required a misrepresentation to be made to consumers. It is not enough if members of the public are merely caused to wonder as to a connection. This, of course, is a question of degree as there will be (as noted by the judge) “some mere wonderers and some assumers”, with passing off normally established if there is a substantial number of the latter (even if there is also a substantial number of the former). Unfortunately for Original Beauty Technology, the judge found (reluctantly) that there was insufficient evidence (especially after many years of co-existence) that enough consumers had been deceived into believing that OH POLLY was a sister brand of HOUSE OF CB.

This case once again serves as a good reminder of the severe limitations of the law of passing off, particularly in cases involving get-up and trade dress. Part of the issue, which has been seen through the relevant case-law, is recognition by judges of the fact that the average consumer is generally familiar with the existence of look-alikes and tends to look to brand names, rather than get-up, as an indicator of the trade origin of the goods; making establishing misrepresentation that much harder.

This decision should consequently serve as a powerful reminder to brand owners of the uphill battle claimants must face if they are to succeed in bringing a passing off claim based on get-up and of the importance of ensuring that all relevant IP rights are available to them. For example, in this case, the claimants’ design infringement claim (although partially successful) would have been easier to plead if they could have pointed to registered designs, which do not require proof of “copying”.

Case details at a glance