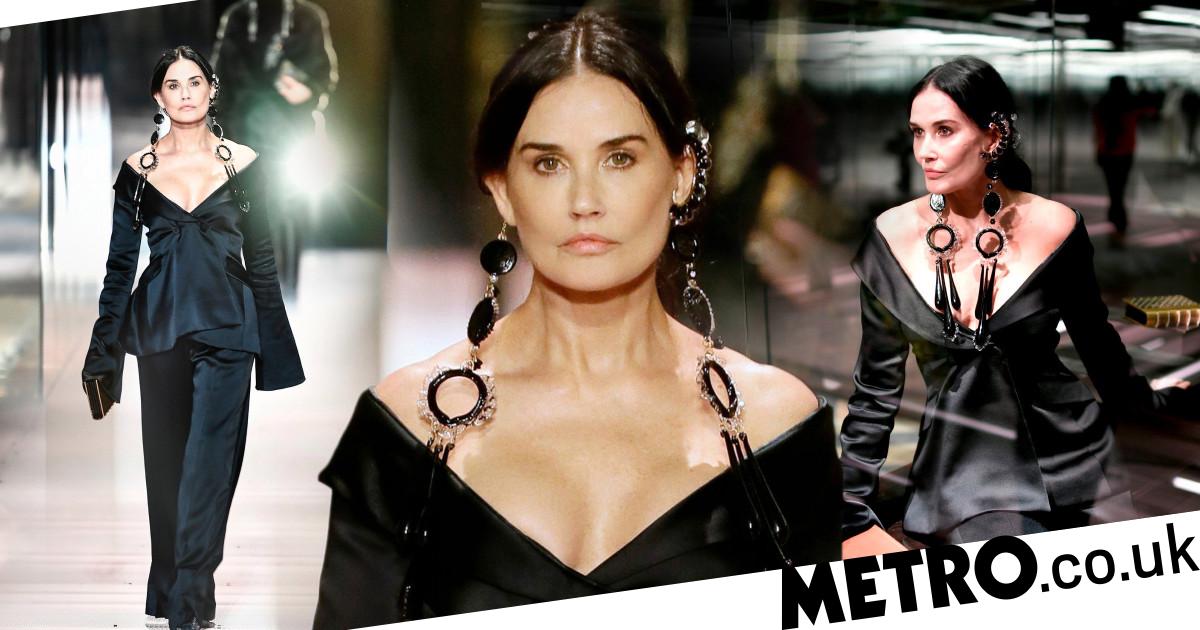 Surprise appearances from Demi Moore are the new status symbol for any runway show worth its salt, it seems.

The 58-year-old smouldered in Rihanna’s Savage x Fenty fashion show back in October, rocking a lace bodysuit alongside models including Bella Hadid and Cara Delevingne.

Now, Demi has rejoined the supermodels at Paris Fashion Week, and she more than holds her own amongst the pros.

The actress sported a dramatic look as she wore a plunging off-the-shoulder satin top with long sleeves and matching wide-leg trousers from the collection.

The outfit was completed with huge earrings that Pat Butcher would be jealous of, while Demi carried a book in one hand.

After walking the runway, Demi then posed in a Perspex box with a grass-covered floor, to remain socially distanced from the other models.

The show was held virtually for audiences, due to the ongoing coronavirus pandemic.

Demi was part of an all-star cast that include Naomi Campbell, Kate Moss and her daughter Lila Grace, Bella Hadid, Christy and James Turlington and Cara Delevingne.

Following the show, the Striptease star shared a video of her runway walk to Instagram and wrote: ‘Fulfilling a teenage dream… Thank you @mrkimjones for having me open the @Fendi SS21 show and congratulations on a beautiful and magical debut!’

Friends praised Demi on her signature walk, and congratulated her and Kim on a stunning show.

Demi was joined in Paris by her daughter Tallulah, 26 with the pair pictured touching down in the French capital on Tuesday.

Tallulah bigged up her mum on Instagram, sharing a picture of her modelling in the Fendi boxes and calling her ‘my queen’.

Scout is one of Demi’s three daughters with ex Bruce Willis; the stars are also parents to Rumer, 32, and Scout, 29.

As well as ramping up her modelling career, Demi was back on our screens last year in the mini-series Brave New World, and also stars in the coronavirus thriller Songbird.

The controversial Michael Bay film envisions the Covid-19 virus in 2024, with people with the virus – which has mutated into Covid-23 – being taken to quarantine camps against their will.

Demi stars alongside Bradley Whitford, KJ Apa and Alexandra Daddario in Songbird, which received negative reviews upon its on-demand release in December.


MORE : Love Island’s Amber Gill ‘really happy’ as she confirms secret romance with mystery man from her past