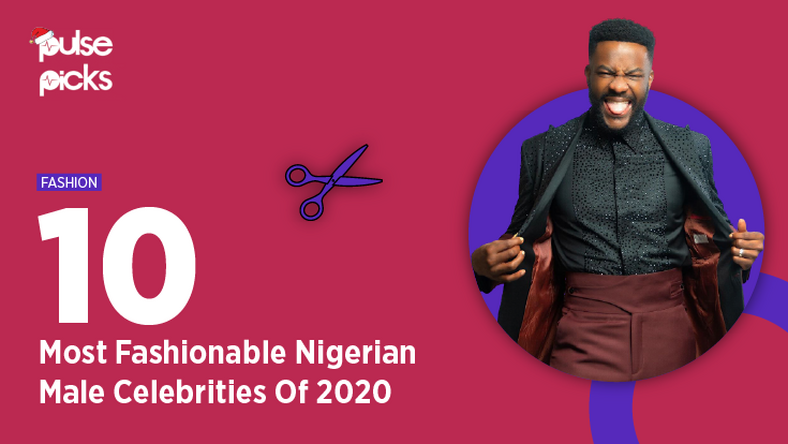 Ebuka has been setting fashion trends for years and tops this list every year. In 2020 he continued in that stride.

The trained lawyer is even more influential because of one particular platform he’s on. Even amidst the pandemic, he made it to our screens every Sunday via his Big Brother Naija hosting gig.

For several weeks, he dazzled viewers with his array of fashionable fits from top designers. It wasn’t just about who the fits came from; most of it was how Ebuka looked in every fit. No matter who made them or what type of fit it was, It’s ridiculous how effortless and easy it was for him to look stylish in anything.

Ebuka’s emergence and continued dominance in the fashion scene have a lot to do with how he has reflected his personality in everything he wears.

Those who know Ebuka will tell you he’s a quintessential gentleman and you see that in the way he dressed and put a unique spin to every fit. He tops this list over the number two name here because his style is more adaptable and mainstream.

No one should have a conversation about fashionable Nigerian celebrities without mentioning Denola Grey.

The style influencer continues to tear up the rule book on how masculine fashion should be. It’s this daring approach that makes Grey remarkable.

With everything he wears, Grey shows a strong sense of self-awareness. The attention to details is superb. He’s never caught unfresh; always in clean cuts and paneled outfits.

His style is becoming iconic and has helped him build a career as a fashion influencer and consultant.

Egbuson is a Nollywood heartthrob, many thanks to how he looks every time he’s seen in public. He has a calm personality which shows with his laid back fashion style. Although sometimes gothic, he has a contemporary touch to everything he wears.

Adekunle Gold in 2020 continued with his evolution into a more daring personality. It was a transition that aided the release of his third body of work ‘Afro Pop, Vol. 1’ which was a step away from his alternative sound on his first two albums.

To compliment the album, he rebranded with his fashion choices from a traditional style to this colourful, retro and bold fashion.

‘No Stress’ was Wizkid’s second single from his 2020 album Made in Lagos.

The record also epitomises his personality, which is evident from the way he dresses. He’s becoming an urban model characterised by dark colours, casual outfits and sometimes slips.

In 2020, Wizkid was also named an ambassador for sportswear brand Puma to relaunch the Puma Suede Classics range.

He also released a ‘Made in Lagos’ merch with Puma to commemorate his album’s release of the same title.

Burna Boy has been a known rebel since broke into the Nigerian music industry. In recent years his sister Ronami has been able to brand him stylistically in that image.

2020 was the same as Burna continued with his gusty look in the lead-up and after releasing his critically acclaimed album ‘Twice as Tall’.

Every year since 2017, Big Brother Naija reality TV show has continued to produced stars. This year we’ve seen a host of these new stars including Prince Nelson.

Prince stood out stylistically on the show and has had the opportunity to work with some of the top fashion designers since he got out of the house.

It all started from the house and how the former Mr Nigeria combined outfits. Prince is effortlessly cool in everything he puts on.

There shouldn’t be any surprise here from someone who was once Mr Nigeria.

Neo as he is fondly called stood out while in the house with his fashion choices. Just a few days in the BB Naija house, he became known for his different colours of Durags he rocked with his outfits.

Soon enough he influenced almost every male housemates to start rocking Durags which became popular in the house.

Aside from the Durags, Neo also came to the house prepared with different outfits which he combined well for a dynamic urban style. That’s how he got the name ‘Drip Lord’ which is also the name of the fashion company he has launched.

RMD is sugar-daddy goals and continues to be that cool dad. At almost 60, RMD is often seen in youthful and urban fashion styles without looking out of place. Although he makes it look easy, that’s a difficult thing to pull off.

Since his breakout at 2018 edition of Big Brother Naija Tobi Bakara has successfully branded himself as one of Nollywood’s hunk.

His deliberately chiselled body makes everything good on him.